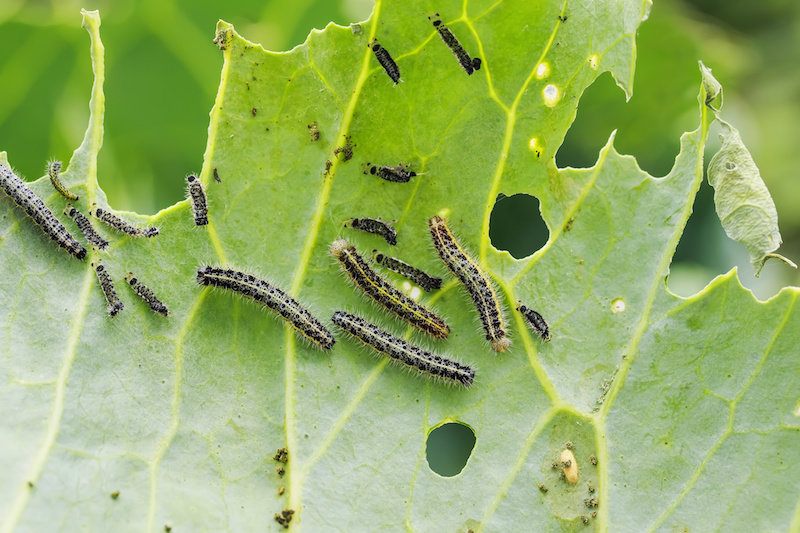 A new study shows that infested tomato plants, in their efforts to fight off caterpillars, don’t adapt well to rising temperatures. This double-edged sword worsens their productivity.

According to the study, two factors are at play. The first is rising temperatures. Insect metabolism speeds up with heat and they eat more. Also, warmer temperatures could open up a wider range of hospitable habitats to insects.

Second, and this is what current models ignore, is how the infested plants react to the heat.

“We know that there are constraints that prevent plants from dealing with two stresses simultaneously,” said Gregg Howe, University Distinguished Professor at the MSU-DOE Plant Research Laboratory. “In this case, little is known about how plants cope with increased temperature and insect attack at the same time, so we wanted to try and fill that gap.”

Plants have systems to deal with different threats. Caterpillar attack? There is a system for that. When a caterpillar takes a bite off a leaf, the plant produces a hormone, called Jasmonate, or JA. JA tells the plant to quickly produce defense compounds to thwart the caterpillar.

Temperatures too hot? Overheated crops have another bag of tricks to cool themselves down. Obviously, they can’t make a run for the inviting shade under a tree. They lift their leaves away from the hot soil. They also “sweat” by opening their stomata — similar to skin pores — so that water can evaporate to cool the leaves.

Nathan Havko, a postdoctoral researcher in the Howe lab, had a breakthrough when he grew tomato plants in hot growth chambers, which are kept at 38 degrees Celsius. He also let hungry caterpillars loose on them.

“I was shocked when I opened the doors to the growth chamber where the two sets of plants were growing at ‘normal’ and ‘high’ temperatures,” Howe said. “The caterpillars in the warmer space were much bigger; they had almost wiped the plant out.”

“When temperatures are higher, a wounded tomato plant cranks out even more JA, leading to a stronger defense response,” Havko said. “Somehow, that does not deter the caterpillars. Moreover, we found that JA blocks the plant’s ability to cool itself down, it can’t lift its leaves or sweat.”

Perhaps, the plants close their pores to stop losing water from the wounded sites, but they end up suffering the equivalent of a heat stroke. It’s even possible that the caterpillars are crafty and do extra damage to keep the leaf pores closed and leaf temperatures elevated, which will speed up the insect’s growth and development.

And, there are consequences.

“We see photosynthesis, which is how crops produce biomass, is strongly impaired in these plants,” Havko said. “The resources to produce biomass are there, but somehow they aren’t used properly and crop productivity decreases.”

There are many open questions to be resolved but, as of right now, the study suggests that when global temperatures rise, plants might have too many balls to juggle.

“I think we have yet to appreciate the unexpected tradeoffs between defense responses and plant productivity, especially when other types of environmental stress are present,” Howe said. “Turning on the defense response may do more harm than good if the plants face high temperatures or other stresses.”

The study is published in the journal Proceedings of the National Academy of Sciences. The research team from the Howe lab includes Michael Das, George Kapali, Nathan Havko and Gregg Howe. Research on photosynthesis was done with the support of Alan McClain and Thomas Sharkey from the Sharkey lab.