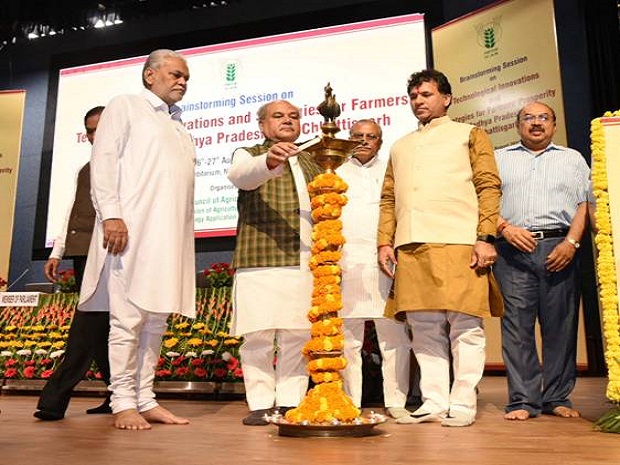 Urging every farmer of India to be a progressive farmer said Union Agriculture Minister Narendra Singh Tomar and added that farmers should adopt new technologies and advancements in the field and must have frequent engagements with scientists and local Krishi Vigyan Kendras.

Inaugurating the two day ‘Brainstorming Session on Technological Innovations and Strategies for Farmers’ Prosperity in Madhya Pradesh and Chattisgarh’ in the presence of the Ministers of State Parshottam Rupala and Kailash Choudhary in New Delhi, the Minister emphasised that ‘Gaon, Garib, Kisan’ is always at the centre of Prime Minister’s thoughts and actions and all these initiatives are aimed at fulfilling the vision of doubling farmers’ income by 2022.

The Minister said that being an important sector, agriculture should play a stabilising role in the economy and for this modernisation and technological advancements are required in the field to which the ICAR can contribute immensely.

The Minister added that this series of discussions with farmers that started with Rajasthan in July should continue with every other state as this initiative will definitely help in the prosperity of the farming community. Calling on the farmers to adopt modern technologies, the Minister said that the discussions and learning from the two day session shall be taken forward to practising in the agricultural fields.

Enumerating the major challenges in the agriculture sector such as providing market connectivity and promoting agricultural exports, Tomar said that amongst these one major challenge is farmers not getting proper value for their produce. For this, he called for better coordination between the farmers and researchers in the field for improvement of agricultural produce. Indian products should be able to compete with products from across the world and thereby fetch best market value. Although farmers get subsidy and Government support, their aim should be not to solely rely on Government support but to take initiatives on their own to improve productivity.

Highlighting the importance of integrated and organic farming, the Minister said that the thought of farming as just growing grains should be changed to adoption of integrated farming wherein fisheries, poultry, animal husbandry and bee keeping etc. become part of farming. If every farmer starts doing this, the GDP share of agriculture shall increase.

Sanjay Agarwal, Secretary, (DAC&FW) Ministry of Agriculture said that it is for the first time that Central Government is holding State specific discussions and that too directly with the farmers. The Secretary also said that the banking formalities have now been reduced and farmers can easily open accounts. Asking farmers to join for the new farmers’ pension scheme – PM Maan Dhan Yojana, the Secretary said that those farmers who have already registered for PM Kisan scheme will now start getting all information on their registered mobile phones.

Dr. Trilochan Mohapatra, Secretary (DARE) & DG (ICAR) stressed on the adoption of the newer and advanced technologies that will help in achieving the targeted goal of doubling the farmers’ income by the year 2022.

Outlining few issues in Madhya Pradesh and Chhattisgarh, Dr. Mohapatra said that discussions shall be on how proper value for product can be ensured, market intervention through FPOs, role of scientists and institutes and how crop diversification can be made possible in these states.