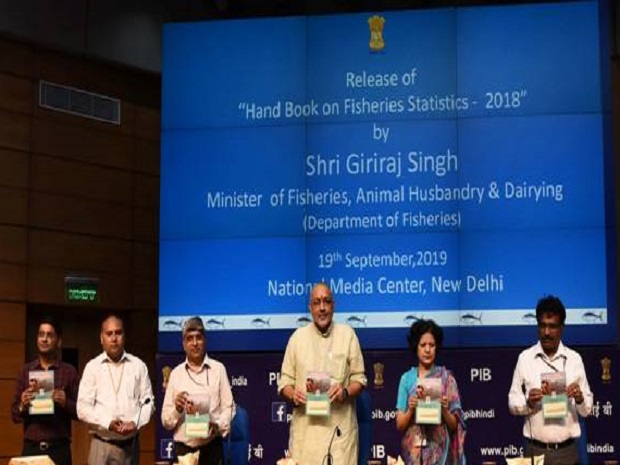 Minister of Fisheries, Animal Husbandry and Dairying Giriraj Singh said that the Central Government will invest Rs. 25,000 crores in the next five years to enhance infrastructure and boost production of fishes in India.

Fisheries sector will play a crucial role in the doubling of farmers’ income, Singh said while releasing the 13th edition of “Handbook on Fisheries Statistics – 2018”, on September 19, 2019, published by the Department of Fisheries of Ministry of Fisheries, Animal Husbandry and Dairying.

Singh said that the Ministry will strive to further increase the 14 per cent growth rate in inland fisheries and are working towards creating more awareness among the State governments and the people.

The fisheries sector is a major source of livelihood for over 1.6 crore people, along with double the number in down and upstream. Development of fisheries can ensure nutritional security, food security of India and also provide employment in these regions that are predominately inhabited by rural populace.

India is currently world’s second largest producers of fish. It is also world number two in aquaculture production as well as in inland capture fisheries.

Andhra Pradesh has recorded the highest production of inland fish with 34.50 lakh tonnes, whereas Gujarat is the leading state in marine fish (7.01 lakh tonnes) in the country. Total registered fishing vessels and fishing crafts in coastal states/UTs were 2. 69 lakhs as on July 31, 2019.

There has been steady growth in the export of fish and fish products over the period. Efforts are being made to boost the export potential through diversification of products for export.